This post describes what LDAP “nested groups” are and how we ended up modelling and representing them in code.
June 5, 2019 705 words

In Mattermost v5.8 we deployed LDAP group sync feature to enable Enterprise Edition customers to create and synchronize groups in Mattermost matching their LDAP groups. The goal was to ease onboarding by automatically adding group members to configured teams and channels.

With the upcoming Mattermost v5.12 we’re adding the ability to create teams and channels that are only accessible to those synced groups. This post describes what LDAP “nested groups” are and how we ended up modelling and representing them in code.

The two main types of groups in LDAP are groupOfNames and groupOfUniqueNames. At minimum they have a cn (common name) attribute and can have membership attributes member or uniqueMember, respectively.

As an example, the below LDIF creates two groups: developers and senior-developers.

When a group has another group as a member we call it a “nested group”.

There are two main query operations one wants to perform when dealing with nested groups.

For our example, these propositions are all true:

For example, this filter retrieves all of the recursive members of developers:

And this filter retrieves all of the recursive groups that suzanne belongs to:

However, not all LDAP implementations natively support LDAP_MATCHING_RULE_IN_CHAIN, so when we set out to support LDAP nested groups in Mattermost I realized we would need to do the group traversal in our application code.

We can represent our example arrangement with a directed graph (aka digraph) as seen in figure 1. 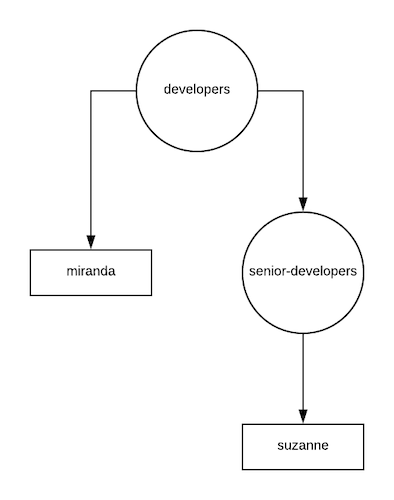 The digraph makes the structure easy to reason about and, moreover, because cycles are possible in LDAP nested groups — group A can have group B as a member which in turn has group A as a member — the digraph is critical to avoiding needless code complexity and errors. Here’s how it works:

From a Group’s Perspective

From a Person’s Perspective 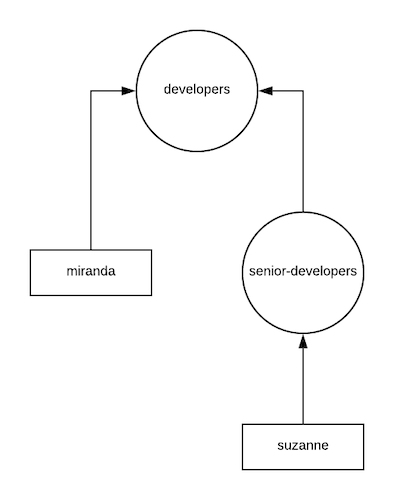 The same data model and traversal logic can be reused to achieve both of our main objectives.

In Mattermost I represent the digraph as an adjacency list. In Golang our figure 1 graph looks like this:

Normally an adjacency list representing a graph would include all vertices as keys in the array or map. However, in our LDAP case people will never have groups or other people nested under them, so I was able to remove those keys without losing any relevant data.

One can input the adjacency list into a breadth-first (or depth-first) search — avoiding cycles — to get the reachable vertices. It performs well at scale and is easy to serialize and debug.

That pretty much summarizes the interesting parts of modelling and representing LDAP nested groups. If you have any questions feel free to reach out. Thanks for reading!